It's the most advanced Linux distribution I know of. 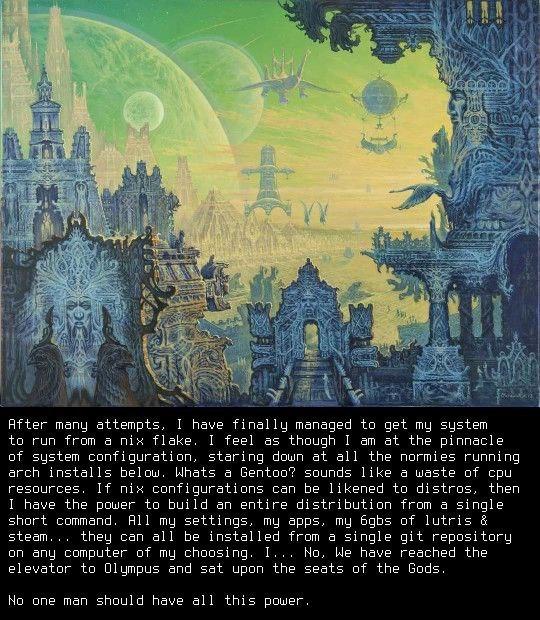 - Nix brings Functional Programming to the system. It's declarative, a pleasure to configure and use.

- Easily share and sync the system and configurations between multiple hosts.

- Easy to automate using a Git CI flow to build the system, generate cache and deploy on many hosts.

- Can start a fresh system at every boot. root folder ("/") can be scrapped.

- Packages of any version, even conflicting versions, work in parallel.

- Packages are built from sources in a sandboxed/airgapped environment once and (binary) cached, other hosts can reuse it without building.

- Great community. Made by big brains. Used by competent people.

Is it for you?

It depends on who you are.

People benefiting the most of NixOS are usually power users, programmers.

But NixOS can benefit any user willing to pay the price in learning/study that is required.

Install is manual. (But simple.)

I highly recommend NixOS for Arch users. Because Arch teaches you the Linux basics while NixOS solves automation and resiliency.

NixOS is where you want to be at: Low effort, reliable, productive. Allowing boldly experimentation.

How to start at NixOS?

- The learning curve is real.

- It's a major milestone.

- Focus on getting the basics right (nix language).

- Getting acquainted with Nix(OS) is important enough.

- When onboarding stick to Nix(OS) only. Use what you already know. Avoid introducing anything new.

How to be proficient at NixOS?

- Ask for help. The community is there for you.